3) WHY DON'T MY RESULTS COMPARE IN ALL THE WELLS?

In the majority of wells, results from samples collected with the HydraSleeve (as well as other no-purge samplers) will compare favorably with results from samples collected with traditional sampling methods (i.e. well-volume purging and low-flow purging). Some samples may have slightly higher concentrations and some slightly lower concentrations. However, in a few wells, some samples may not compare very well at all. In almost all of these cases, this is due to the inherent differences between low-flow sampling, well-volume purging and no-purge sampling and the resulting source of the sampled water.

Standpipe studies conducted by Parker and others in 2002 demonstrated that no-purge samplers (HydraSleeve included) produced statistically similar results in a spiked standpipe when compared to results from samples collected from a discharge spigot at the same depth. Similar investigations done at the Stennis Space Center under the EPA Environmental Technology Verification Program compared low-flow pumping systems and no-purge sampling devices to control samples collected in a 100-foot long standpipe. Again, the results compared favorably with the control samples.

In short, if you sample the same water you get the same results. 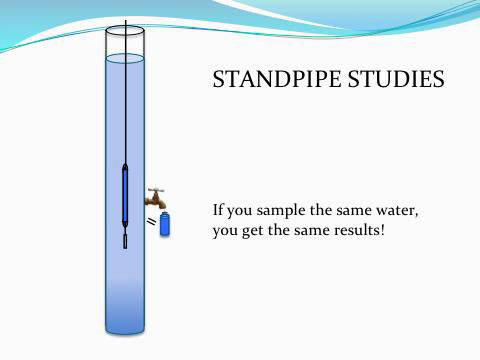 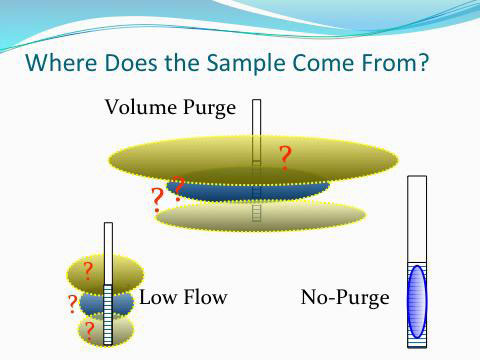 No-purge devices only sample water flowing through the screen under ambient (undisturbed) conditions. They collect a sample from a defined vertical and horizontal interval within the well screen. As a result, no-purge sampling is a very precise and repeatable method for simply and inexpensively collecting groundwater samples. In contrast, well-volume purging and low-flow sampling induce flow into the well from zones above and below the well screen as well as from an undefined horizontal interval adjacent to the well. Depending on the geology of the formation surrounding the well screen, well-volume purging (and, low-flow sampling) can pull water into the screen from substantial distances away from the well, water that would not ordinarily be entering the well screen under ambient flow conditions. The difference in the origin of the sample (within the screen, from above or below the screen, from formations adjacent to the screen) is the primary reason differences are occasionally seen between no-purge sampling results and well-volume purging or low-flow results.

Occasionally, when using a no-purge sampling device in or near a contaminant source or smear zone, contaminants that have a tendency to attach to soil particles or exist as microscopic colloids will have lower concentrations in no-purge samples than in purged samples (Zemo 2006). Purging, particularly with a bailer, has a tendency to agitate the water column in the well and the formation materials adjacent to the well screen and mobilize particles that are not normally mobile in the groundwater system, resulting in elevated concentrations of contaminants (like BTEX) when compared to no-purge samples. The same phenomenon has been seen when comparing low-flow samples to samples collected using well-volume purging.